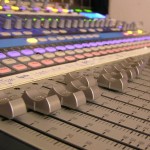 About once a month there is a Blues Moose Café session. It started some years ago when we had on a regular base some blues artists in our radio show for a performance. Our broadcast studio has not enough facilities to handle a large band and not enough space to host a large audience. The solution was found in the café in the mainstreet of the village, which was almost ‘around the corner’ from our broadcast studio. So we settled in Café bar De Comm, which was normally closed on Wednesdays, but has enough space for a blues band and a lot of audience in an ambiance which belongs to the blues. So once a month I carry a lot of equipment in to the kitchen of the café. Just in the kitchen, because it is rather good sound isolated from the stage in the café. There are three isolating doors in between and I need that quietness to make a good judgment of the sound we are recording. The sound perception for the crowd in the café comes at the second place and most times the backline of the band can be heard without any amplification. Only the vocals need some sound reinforcement. Beside the radio recordings there is also a video crew using three or four cameras for making a nice video recording of the performance. The band receives the recordings and the Bluesmoose crew makes a radio special of the performance, which will be broadcasted the next Friday. Bands and artists from The Netherlands and far abroad, have found their way to the café and they can use the recorded material for their own promotion. Every recording session starts around 8 PM, or when we are ready and finishes at 10 PM sharp, because otherwise the neighbors starts complaining. The recordings are pure, just the live performance and without any modifications afterwards. Only for the rare case that the band is not satisfied with the mix, there is the possibility to do a re-mix of the additional raw multi-track recording.
The photographs below will give an impression what is happening in the kitchen, behind the doors which are closed for the audience. There I build up my equipment and do the mixing and this is also the place where the snacks are prepared for the meal after the session. For the results I refer to the YouTube site: 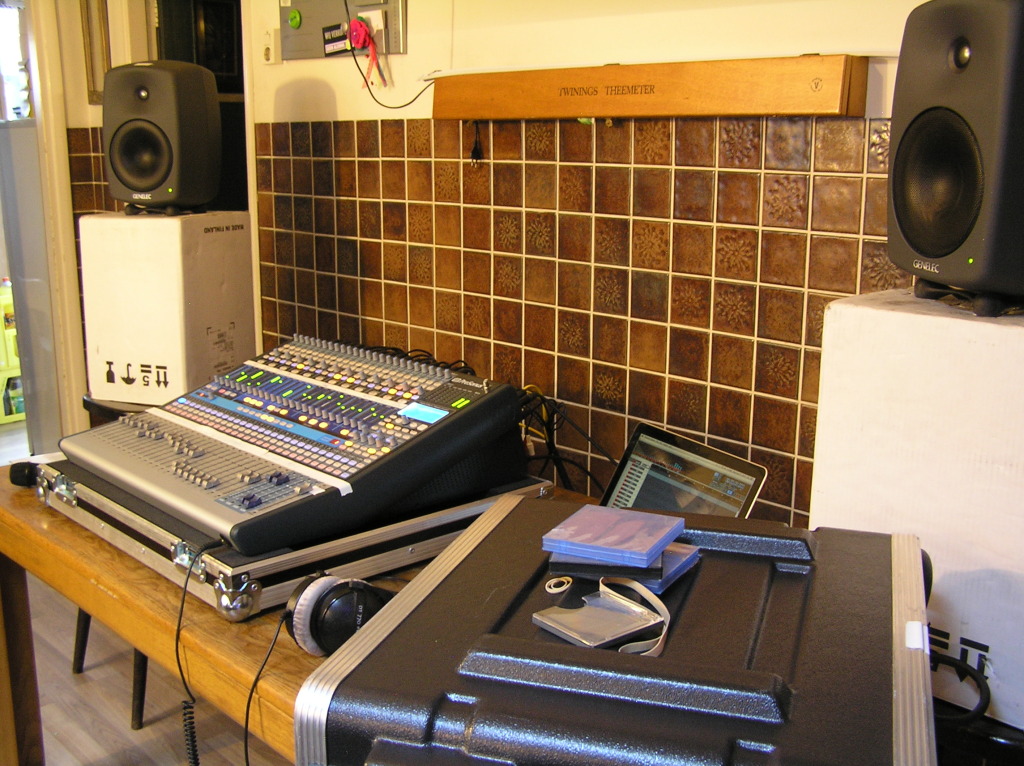 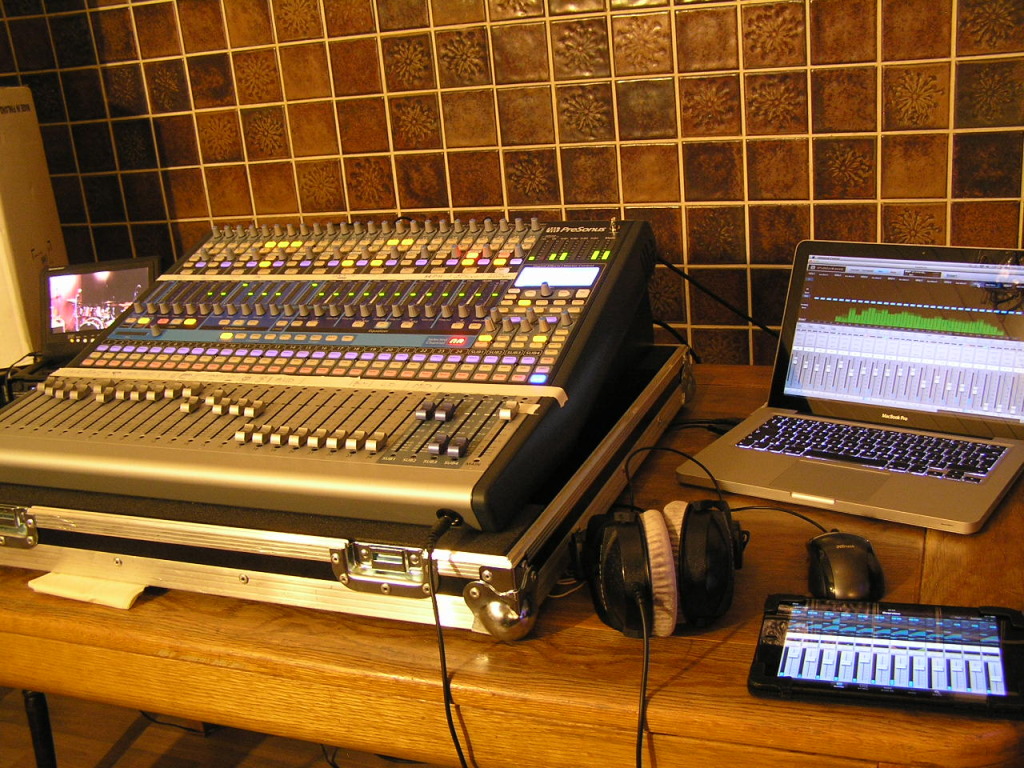 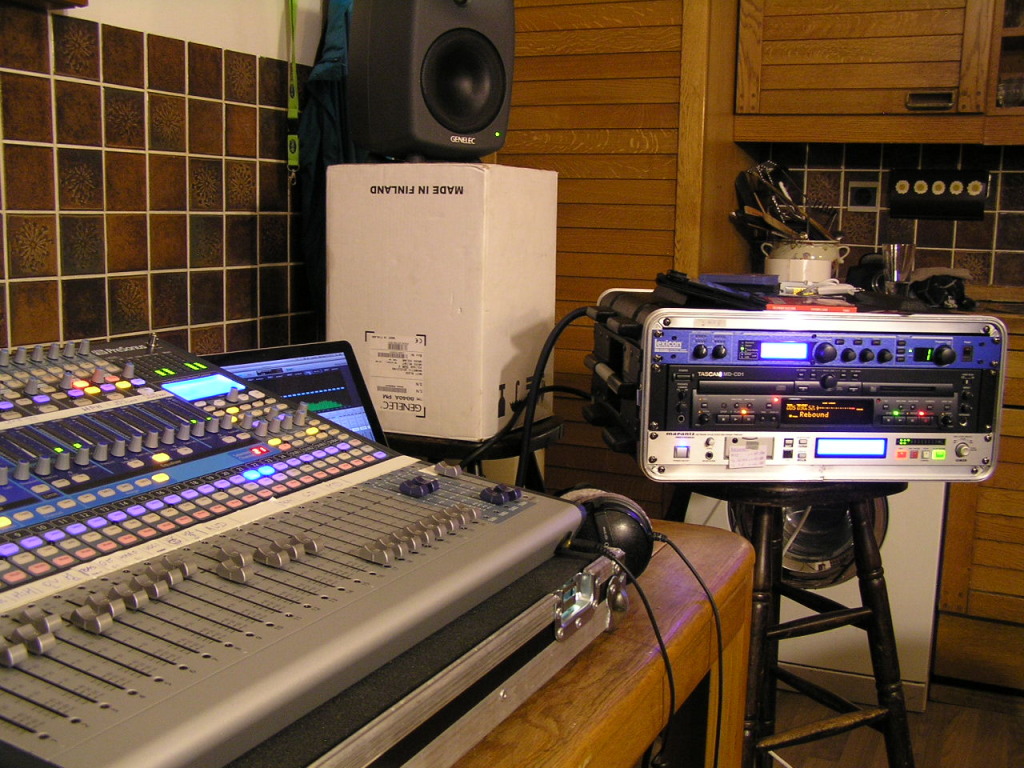 It is improvising in the kitchen, the digital mixing console, Presonus SL24.4.2 is at the kitchen table. A flight case with a flashcard recorder Marantz PMD580 and a Lexicon effect processor is standing at a barstool. The monitor loudspeakers, Genelec 8040, are also standing on a barstool, while the carton boxes pushes them to the right height. The final two-track recording is made on the PMD580 flashcard recorder and for backup a second flashcard recorder is also recording the two-track. An Apple MacBook Pro is used for the registration of all raw channels, just for the case that a re-mix afterwards is necessary. The software on the MacBook gives also a nicer graphical impression of all setting of the mixing console. With an IPad-mini the system can be operated on remote, which is very convenient for setting up the monitor mix and a ‘FOH’ mix. On the little screen on the left side I can follow the video recording and can watch what is happening on stage. At every recording session I get a lot of help with carrying equipment in and out of my car, pulling all the cables, setting up the mikes and judging the mix, from my assistants Roland, Danny, Thomas or Wim.

An example of a recent (September 2014) recording from The Dynamite Blues Band: