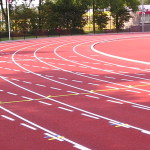 As long as I live in the city of Nijmegen and that is from the year 1986, I am a member of an Atletics group, named Nijmegen Atletiek and my activity there is running. Three times a week you can find me there for the training sessions given by our trainer Richard Riley. The group is training for medium distances on the track. Twice a week we train at track and on the sunday mornings you can find us in the nearby forrest. The mixed group has a large spread in ages and qualities. I might be one of the members with highest age and my speed on the track was better some years ago. However I planned keep joining this group as long as possible. Besides the training for the mid distances (400 – 1500m) on the track, I also do running on the longer distances, starting with 10km and up to 42km.

My finishing times at the marathon, the half marathon, 15km and 10km: